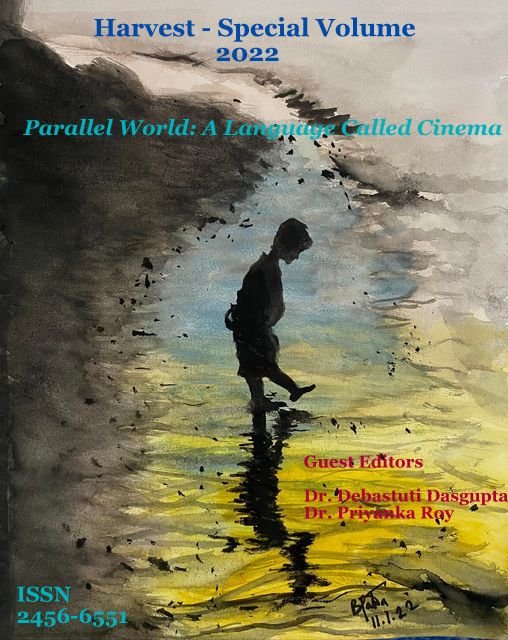 Cinema is much more than the nexus between art and technology. Cinema which is a potent communication tool, encompasses and engulfs us with its everlasting impact. In its different forms, cinema integrates the roles of poetry, music, painting, drama, and architecture. Whatever function a cinema is intended to serve, it mostly serves as an artistic manifestation of a notion or concepts. For a predetermined period of time, cinema transports us on a journey that gives a structured event that piques both our thoughts and our emotions.

Numerous issues have focused on cinema in different journals like every year to understand and explore various theoretical, historical and critical approaches to films. Some concentrates on technicalities or marketing of cinema too. This special issue of Harvest has not limited to any aspect of film in particular but tries to see film as a language which creates a parallel world. Cinematic language are methods and conventions of cinema that are used to communicate with the audience. Emotions and ideas are expressed visually through lighting, performance, mise-en-scéne, cinematography, editing and many more. Combining all the elements of cinematic language, cinema takes us to an alternate world for at least some period of time.

We are thankful to all the contributors for immense response for their significant contributions on various aspects on films. The year 2022 had witnessed the death of French-Swiss director Jean-Luc Godard – a key figure in the Nouvelle Vague (New Wave), the filmmaking movement that revolutionized cinema in the late 1950s and 60s. The countless accolades to the late “Breathless” director, Jean-Luc Godard, represent his ongoing impact on filmmaking. This special issue is a tribute to the film maestro. The issues include a commentary section which provides a very personal opinion of the authors. Other than that, this special issue consists of pallet full of cinematic issues and remembrance of noted directors, actors and crew members behind the scene. Happy reading!

Department of Journalism and Mass Communication